On October 13, a surgical team stood over two 13-month old boys who were joined at the head and shared up to 2 inches of brain tissue.

Jadon and Anias McDonald were born as craniopagus twins, an incredibly rare condition affecting just one in millions, and October 13 was the day their family had been waiting for. It was the day this team of doctors and nurses at The Children’s Hospital at Montefiore in New York would separate them.
The operation was risky and complicated, but the surgeons were confident.
Before they had made a single cut, they felt like they knew what to expect. Like they’d seen it before. And in some ways, they had — virtually.
Across the country, a team of designers and engineers anxiously awaited the outcome of the surgery. Some of the members were in the operating room, as it was their work that gave the surgeons a look into Jadon and Anias’ shared brain before they were anywhere near the operating room.
At 3D Systems outside Denver, traditional two-dimensional imaging like CT scans were converted into complex three-dimensional models. Some of the models became virtual files the surgeons could manipulate. Others were created by 3-D printers, models the surgeons could hold in their hands.
“We worked hand in hand with the neuroradiologists,” said Katie Weimer, vice president of medical devices for 3D Systems. “We were online for hours with that team, looking at each slice of the imaging data, deciding, is this side Jadon? Is this side Anias? What’s happening with this particular set of vessels?”
3-D printing is not new in the medical field. For years, it has been used for a variety of items such as splints, implants or models for other operations, like heart surgery. 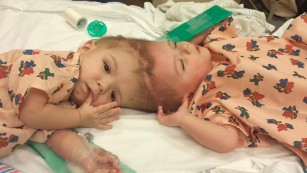 3D Systems has collaborated on dozens of conjoined twins’ cases over the past decade, but the McDonald boys presented a complex new challenge.
Craniopagus twins are extremely rare, occurring in only one of out of every 2.5 million births. About 40% of these twins are stillborn, and another third die within 24 hours of birth.
There are not many surgeons who have operated on craniopagus twins, but Dr. James Goodrich, at Children’s Hospital at Montefiore, is a world expert on them.
For his team, the surgery started with a virtual planning session courtesy of 3D Systems.
“It takes the guess factor out,” Goodrich said. “When you are doing a reconstruction like this, even when we are working on craniofacial cases, there’s a lot of guessing. … You are no longer guessing. You have firm numbers in your mind of what you need to do. I can look at the size of the vessel; I can calculate it out; I can take it out and put it back in.”
The virtual look allowed the surgeons to practice their approach, knowing what cuts to make and when, with the luxury of starting all over again if they needed to. It provided a level of comfort and reassurance.
“When they approach a case like this, there is no guidebook,” Weimer said. “They didn’t go through medical training and learn how to separate conjoined twins, so what we’re able to do with the 3-D visualization and physical printing of the models is create that guidebook. The goal for us is by the time they get into that operating room, they are effectively doing the operation for the second time.”
Join the conversation
On surgery day, Weimer was in the operating room. Throughout the 27-hour operation, the surgical team repeatedly referenced the models. Despite the details visualizations, Jadon and Anias’ brains were fused even more than originally thought, and at one point, the surgeons considered stopping.
But they continued on, and when it was complete, the boys were lying on different beds for the first time. It was an experience Weimer will never forget.
“For me, it was a life-changing event,” she said. “The use of the technology in the operating room, the visualizations used and referenced throughout the full 27-hour period, was really something I had not seen or experienced before. It really was a testament to how important it is to continue to evolve these technologies to get closer to the hands of the surgeons and the surgical team that uses them.”
[Source:- cnn]