5 PS4 Black Friday games deals to look out for 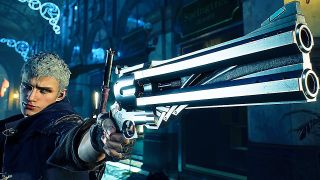 Black Friday 2019 is looming and if you’re like us you’re already drawing up a list of PlayStation 4 games you’ve been coveting all year, just waiting for the time that you’ll be able to buy them for a little less money than usual.

Black Friday itself isn’t until November 29 (although we all know the deals start earlier than that) so we don’t know exactly what the discount divinities will see fit to offer us. That said, we’ve been through enough Black Fridays in our time that we think we can guess some of the games that are more likely to receive price cuts than others.

The deepest discounts are likely to be applied to PS4 games from 2018 and earlier (think Spider Man or Assassin’s Creed Odyssey) but there is still a good chance you’ll see some 2019 releases in those Lightning Deals, especially if they were released in early 2019.

More recent releases like Borderlands 3, Death Stranding or Code Vein aren’t quite as likely to be featured solo in Black Friday and Cyber Monday deals but it’s not impossible.

Besides, there’s always a good chance you’ll get a bargain console bundle with one of these new titles included so keep your eyes peeled! Now that the PS5 has been confirmed for a 2020 release we could see some surprisingly steep discounts as retailers prepare to make way for the next generation.

To give you some inspiration, we’ve put together a list of five PlayStation 4 games released in 2019 that we think could have a good chance of appearing in the Black Friday sales based on their release dates and patterns from Black Fridays gone by.

It was one of the first big game releases of 2019 so we think Kingdom Hearts 3 has been on shelves long enough that there’s a fairly good chance it could receive some kind of price drop in the Black Friday period.

With its vibrant Disney worlds and charming characters, Kingdom Hearts 3 is the perfect game to keep you warm through the winter, even if it is just an emotional and spiritual warmth.

In our review we praised the game for being “a charming and action-packed adventure, marrying the fantastical nature of Final Fantasy with the magical familiarity of Disney in worlds that are almost indistinguishable from the films they depict.” If you can get that kind of joy for a cut price we say take it.

Another early 2019 release, Devil May Cry 5 is a second strong contender for a cameo in the Black Friday sales. We’ve already seen some pretty steep discounts on Devil May Cry this year (sub-£20 steep which is exceptional for a game that was released only a few months ago). For that reason, we think it will almost certainly be discounted for Black Friday. It won’t, perhaps, reach new lows in terms of price but a bargain similar to those gone by is likely.

Devil May Cry 5 is the Black Friday bargain for you if you’re looking for something action-packed and over the top. Isn’t that all of us at some point? Don’t be put off by the number 5 in the title, in our review we said that this “hellishly fun game” is accessible for new comers as well as long-time fans.

Sure, Halloween will be over by the time Black Friday rolls around but that doesn’t mean the scares have to end.

Resident Evil 2 is a remake of a survival horror classic that you really can’t afford to miss. Especially if it does enter the Black Friday sales, which is likely given it’s a very early 2019 release.

When it was released in January of this year, we awarded the game 4.5 stars and deemed it an “utter triumph” for the classic series.

The Division 2 was released in March 2019 and its second episode has just launched, so we could be slightly optimistic in our prediction of a discount here.

However, the game was previously heavily discounted by Ubisoft in June and then again during Amazon Prime Day in July so it’s not unreasonable to expect that something similar might happen again.

As a live service multiplayer game, The Division 2 thrives when it has as many players as possible so there’s precedent and justification for the base game being dropped to a more appealing price point to draw in new players before Christmas.

We know, we know. It’s just out! How could we think FIFA 20 will be discounted already after all of our “early 2019” theorising? But historically, new FIFA releases have made appearances in Black Friday sales. It may not be by much, but  you have a reasonable chance of seeing FIFA 20’s price slashed at least a little by some retailers. Even more likely, you could see it in some good value console bundles.

With less than a year until FIFA 21 comes around and leaves this release outdated, FIFA 20 doesn’t actually have that big a window to be a new and appealingly discounted game, so Black Friday is the perfect time for retailers to shift some copies before Christmas.

Whether you’re looking for a gift for the football fan in your life or you’ve been holding back to see what the reviewers have to say before diving in yourself (we deemed it “the best FIFA game in a good few years” by the way), FIFA 20 could be a good choice, especially after EA has committed itself to making improvements based on fan feedback.

While we can’t say for certain that all or any of these games will appear this Black Friday we think the chances are good and it’s best to be prepared.

Make your list, check it twice and be sure to come back to TechRadar because we’ll be covering all the best PS4 game deals in real time on Black Friday itself and in the days running up to it.