AMD has taken the wraps off its latest GPU, the Radeon RX 480. The launch of the RX 480 marks the debut of AMD’s new Polaris architecture, after many years of iterative refreshes to previous chips. Graphics cards based on the new GPU will target gamers in the value-focused mid-range segment.

The company is focusing on delivering smooth VR experiences to users at all budget levels. Radeon RX 480 cards will also be aimed at gamers who target a playable resolution of 2560×1440 with quality settings turned up. The GPU, codenamed Polaris 10, is manufactured using a new 14nm lithography process which helps reduce heat and power consumption.

The Radeon RX 480 is a full implementation of the Polaris 10 design, with 2304 stream processors divided into 36 clusters. Its base clock speed is 1120MHz but it can achieve bursts of up to 1266MHz when needed. Peak performance is rated at 5.8 Teraflops. Either 4GB or 8GB of GDDR5 RAM will sit on a 256-bit memory bus. Total power draw is rated at 150W, and AMD promises 2.8X better performance per Watt compared to Radeon R9 200 series cards. 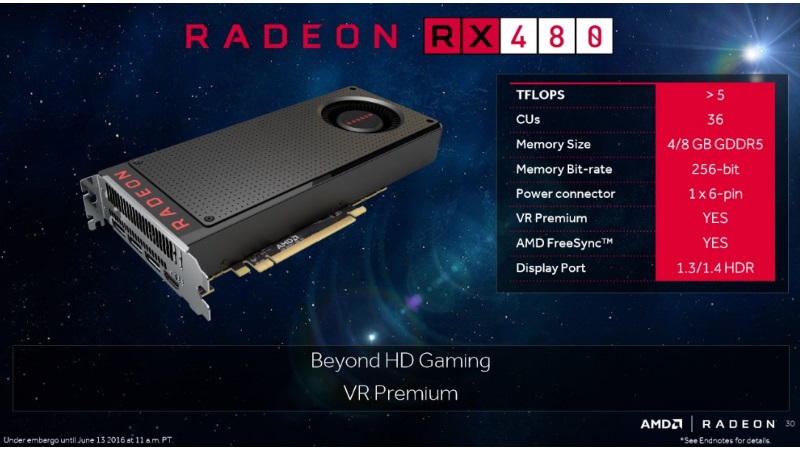 Graphics cards following AMD’s reference design will have a blower-style cooling shroud, three DisplayPort outputs and one HDMI output. Only a single 6-pin PCIe power connector will be required.

With this launch, AMD is positioning its top single-GPU card for this generation well below the flagship level that Nvidia has established with the incredibly powerful GeForce GTX 1080 and 1070 (Review). Theupcoming Radeon RX 470 and 460 GPUs will cater to 1080p gamers and eSports enthusiasts respectivly, and should launch in the coming months. Future products based on the separate Vega architecture will bolster AMD’s performance capabilities at the high end when they are released early next year.

AMD has announced pricing of Rs. 28,990 for reference Radeon RX 480 graphics cards with 8GB of GDDR5 RAM in India, but that figure comes with a surprising disclaimer which states “Please note that the announced price doesn’t factor duty, freight, distribution margins, retailer margins, local taxes etc.” Considering that the global price of $239 works out to approximately Rs. 16,120, there should be no reason for such a wide price gap. Asus, Sapphire, Gigabyte, MSI and PowerColor will be releasing reference Radeon RX 480 cards as well as versions with their own cooling solutions, but stocks are not expected to be available in the market for a few weeks, according to a channel source Gadgets 360 spoke with.

Indian pricing for reference Radeon RX 480 cards with 4GB of RAM has not been released, but the global price is $199 (approximately Rs. 13,420). AMD had previously indicated channel pricing of Rs. 20,000 for the Radeon R9 380X, the final retail price of which turned out to be Rs. 25,999. If that is anything to go by, AMD’s latest products will not be priced competitively compared to Nvidia’s GeForce GTX 970 and the middle tier of the GeForce GTX 1000 range, which will undoubtedly launch before the end of this year.