The BioWare forums are closing down forever 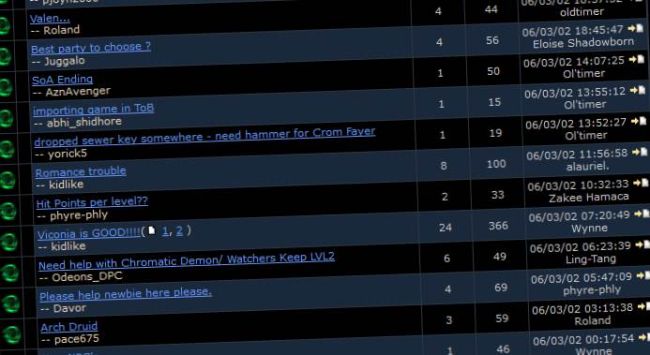 The last time I posted in the BioWare forums was early 2012—a brief, silly dust-up over Retake Mass Effect—and I haven’t used them with any kind of regularity since before the EA takeover. So I can’t claim that today’s announcement that they are being closed down, so that BioWare can focus on mainstream social media, has shattered my heart into a million pieces, leaving a void that can never be filled. But it is kind of sad.

BioWare announced the news today on its blog, saying that the public boards for Dragon Age, Mass Effect, and its legacy games—Baldur’s Gate, Jade Empire, Neverwinter Nights, KOTOR, MDK2, Shattered Steel, and Sonic Chronicles—will be gone as of August 26. “In the past, our forums were the only way we could speak to you directly. They allowed our developers to talk with fans, and gave our players the opportunity to talk with each other about our games,” Lead Community manager Conal Pierse wrote. “But with the rise of social media and geek culture, there have never been more ways for us to connect.”

“With so many great things so widely available, our developers today find themselves spending more time on other sites, and less time in our own forums. And to our fans and players who came to those boards looking to talk to us, it was a great disservice,” Pierse wrote. “So it is with a heavy heart that we will close our public forums on August 26, 2016.”

The forums will remain online “in a read-only state” until October 26 to give readers a chance to retrieve and store anything they want to keep. After that, they’ll be taken down entirely, although some “private boards” will be maintained for possible use in beta testing or “other special projects.”