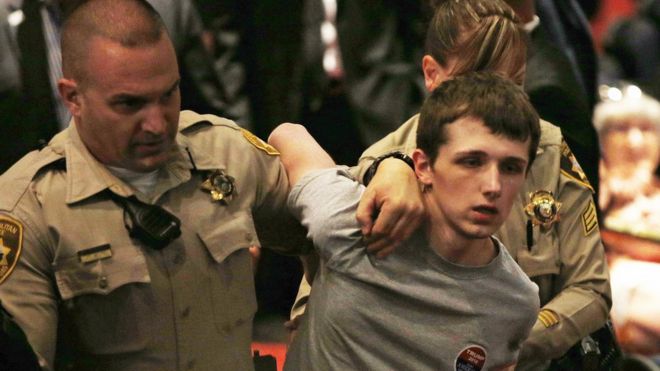 A British man has been sentenced to 12 months and one day in prison over his attempt to grab a gun in a bid to kill Donald Trump.

Michael Sandford, 20, pleaded guilty in September to being an illegal alien in possession of a firearm and disrupting an official function.

He was accused of grabbing a policeman’s gun at a rally in Las Vegas in order to shoot at the candidate.

His mother says “he is remorseful over what he did”.

Sandford, of Dorking, Surrey, had faced up to 10 years in prison over the alleged assassination plot.

The court heard that he could be eligible for release in four months’ time, at which point he will be deported to the UK.

The defence team said their client is autistic and suffers seizures and obsession-compulsion anxiety.

He smiled as members of his family waved to him and mouthed: “I love you.”

Sandford then broke down in tears as he apologised for what he had done and for taking up time and costing the taxpayer money.

“I just feel terrible about it,” he said.

His mother, Lynne Sandford, also addressed the judge, saying her son was “cherished and adored”.

“It breaks my heart to see him in this environment,” she said, as she appealed for a lenient sentence on the basis that her son needed treatment and the support of his family.

After Sandford was arrested, he told officers he had planned to shoot the billionaire Republican candidate.

He failed to pull the weapon from an officer’s holster, the court heard.

His mother said that she had lost contact with her son after he left home to travel around the US in 2015.

He had previously shown no interest in politics, and she was unable to explain why he would want to shoot Mr Trump.

According to court documents, Sandford, who was homeless and living in the US illegally having overstayed his visa, told the Secret Service that he had driven from California to Nevada with the goal of shooting Mr Trump.

The papers detail how he had been plotting the attack for around a year and had gone to a gun range in Las Vegas the day before the attack to learn how to shoot, firing 20 rounds from a 9mm Glock pistol.

He reportedly told an officer that he had expected to die in the attack but that he also had tickets for a later Trump rally in Arizona in case he needed a second chance.

“You have a medical problem,” the judge told Sandford, adding that it is “nothing to be ashamed or embarrassed about.”

“I don’t see you as evil or a sociopath,” the judge said, wishing Sandford luck as he rose to leave the courtroom.