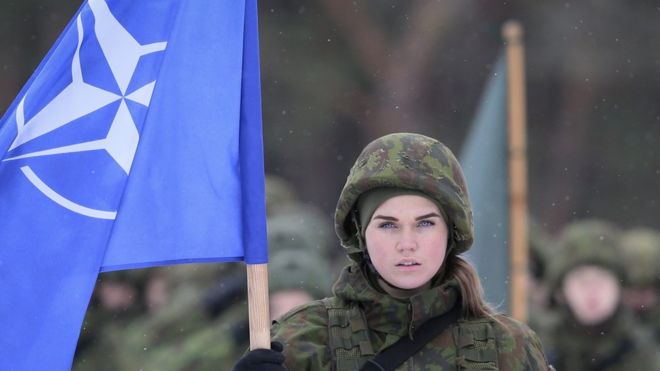 Earlier, France and Germany complained that the Minsk peace deal for Ukraine was still not being fulfilled.

Russia’s military interventions, first in Ukraine, then in Syria, were high on the EU summit agenda in Brussels.

But Italy and Slovakia want sanctions, that have cost EU exporters billions of euros, eased. The summit focused on the crises in Europe’s neighbourhood.

The destruction of Aleppo and the exodus of Syrian refugees, migrant pressure from Africa and Ukraine’s conflict with Russia were key themes.

Russia’s annexation of Ukraine’s Crimea region in 2014 triggered the first round of sanctions.

They have been ratcheted up, targeting Russian arms exporters, banks and individuals – many of them close to President Vladimir Putin – blamed for the pro-Russian insurgency in Ukraine.

But this summit will also be remembered for its new language on ties with Ukraine – setting limits to EU support.

The far-reaching EU-Ukraine Association Agreement was stalled in April when Dutch voters rejected it in a referendum.

So the leaders addressed Dutch anxieties with a new, legally binding EU text. “The Agreement does not confer on Ukraine the status of a candidate country for accession to the Union, nor does it constitute a commitment to confer such status to Ukraine in the future,” it said.

The EU will not offer Ukrainians the right to reside and work in the EU, nor offer EU military assistance. Any such help is a matter for individual governments.

The leaders also sought to defuse EU tensions over the many boatloads of migrants still crossing the Mediterranean from North Africa.

A plan to relocate 160,000 refugees from overcrowded camps in Italy and Greece has been opposed by Hungary, Slovakia and Poland. Only a fraction of those refugees have been moved.

Italy says record numbers of African migrants have reached its shores this year. Nigeria and Eritrea are the top countries of origin. Dire poverty drives many towards Europe.

“It’s a structural problem that 80% of the arrivals [in Italy] have no right to asylum, so they cannot be relocated inside the EU,” German Chancellor Angela Merkel said.

The EU sees its controversial March deal with Turkey as a model for similar deals in Africa. One with Niger is the most advanced.

A key goal is to break the business model of the people-smuggling gangs who prey on migrants’ misery.

Since March the migrant influx to Greece has fallen dramatically, but Turkey accuses the EU of blocking its EU ambitions and failing to meet funding pledges.

Mrs Merkel voiced solidarity with Turkey as it is hosts 2.7m Syrian refugees – far more than any EU country.

She said all the EU leaders “recognised that even if there are very critical remarks, it is still our close neighbour”.

The suffering of Syrian civilians in devastated Aleppo overshadowed the talks.

The EU strongly condemned the bombardment by Syrian government forces and Russian warplanes.

Mrs Merkel called the bombing of hospitals “really awful”. “We don’t lack the will to help,” she said – but she deplored the failure of UN mediation in Syria.

The summit included plans to strengthen EU-Nato links in key areas, including “hybrid threats” – such as cyber-attacks – and maritime security.

Poland and the Baltic members – Estonia, Latvia and Lithuania – have not only urged the EU to support Ukraine, but also voiced alarm over Russia’s heightened military presence in the Baltic.

Russia is accused of “provocative” air patrols and missile deployments in the strategic Kaliningrad region.

The summit conclusions say this defence roadmap will be developed speedily in 2017.

And it says European defence is too fragmented and wasteful. It criticises duplication – the EU has 19 types of armoured infantry fighting vehicle, compared with one in the US.

The UK has warned that joint EU military efforts must not duplicate Nato, and it is strongly opposed to the idea of a European army. Such a proposal is not on the table, but closer military co-operation is, ahead of the UK’s Brexit negotiations.

An added worry for the EU is US President-elect Donald Trump’s warning that Europe must spend more on defence. Some EU countries fall short of Nato targets for defence spending.