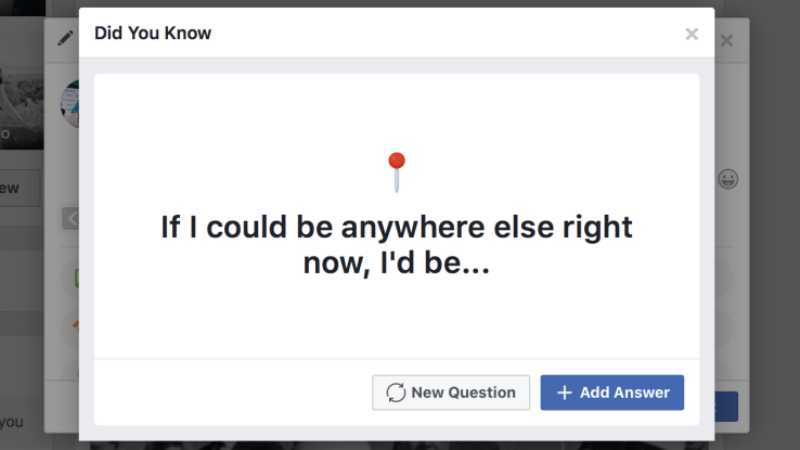 Months after acquiring social questionnaire app tbh, Facebook is rolling out a new feature for user profiles on the Web and apps. Called Did You Know, the feature will appear on your profile and ask you random questions about your interests and hobbies, and help you share this information with your friends in a fun manner.

Some users are seeing this new update where the left tab in their Facebook profile has a small window that has questions like ‘If I could choose any job imaginable, I would want to…’ and ‘If I could be anywhere else right now, I’d be…’. These questions could be seen as aimed at extracting user information that relates to interests, hobbies, and personality, and may one day become a part of advertiser profiles – TechCrunch reports.

Facebook also states that a few questions about your preferred superhero, your guilty pleasures, and your dislikes might pop up on your profile in the coming days. Users will be able to share the answers as colour status updates, or, they could save them as ‘Only me’ when sharing.

The Did You Know feature is similar to what tbh, an anonymous polling app for teenagers, offered before it was acquired by Facebook in October this year. The tbh app let teenagers anonymously answer kind-hearted, multiple-choice questions about friends, who then received the poll results as compliments. At the time of acquisition, tbh had over 2.5 million daily active users and 5 million downloads. This feature, in turn, wants to know more about you instead of your friends.

Facebook, as a social network, has grown exponentially over the past decade, but recent allegations of fake news and information spreading across the platform have prompted users to avoid sharing more of their personal data. This is clearly yet another move by the Menlo Park giant to bring back the good old days of positivity to the social network.