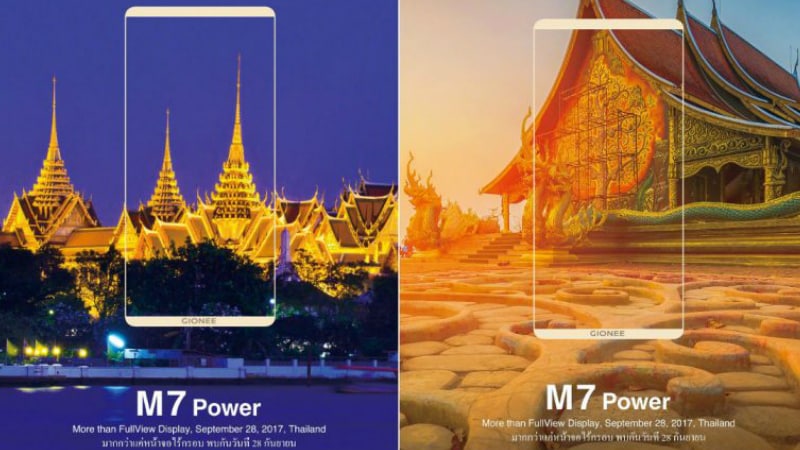 After revealing the teaser of the Gionee M7 smartphoneearlier, the company has now announced that the Gionee M7 Power will be launched at an event in Bangkok on September 28. In the new image teaser, Gionee claims that the M7 Power will have ‘more than a FullView display’ hinting that there might be more to the smartphone than just the bezel-less display.

The new teasers were shared by Gionee on its Weibo page, and it confirms the arrival of the Gionee M7 Power on September 28. This is another variant of the Gionee M7 leaked earlier, and the name suggests that it could do something more with battery capacity – a feature that its other ‘Power’ predecessors came loaded with.

Getting back to the original variant, the Gionee M7, and one must note that right now, a launch date has not been announced as yet. Gionee has only confirmed that the smartphone is arriving soon. A benchmark listing indicated that the Gionee M7 can be expected to run on Android 7.1 Nougat, support a single-SIM slot, and feature a big 6-inch full-HD (1080×2160 pixels) display with an 18:9 aspect ratio. The smartphone is tipped to be powered by the latest 2.3GHz MediaTek Helio P30 SoC paired with 6GB of RAM and ARM Mali-G71 GPU.

The internal storage capacity of the Gionee M7 is tipped to be at 64GB. As for camera, the smartphone is expected to sport a 16-megapixel rear camera with autofocus and flash support. Features include 4K video, face detection, HDR photo, and touch focus as well. At the front, there is tipped to be an 8-megapixel front camera as well. Connectivity options may include NFC, GPS, Wi-Fi, and Bluetooth, and on board sensors listed include accelerometer, ambient light sensor, digital compass, gyroscope, pedometer, and proximity sensor .