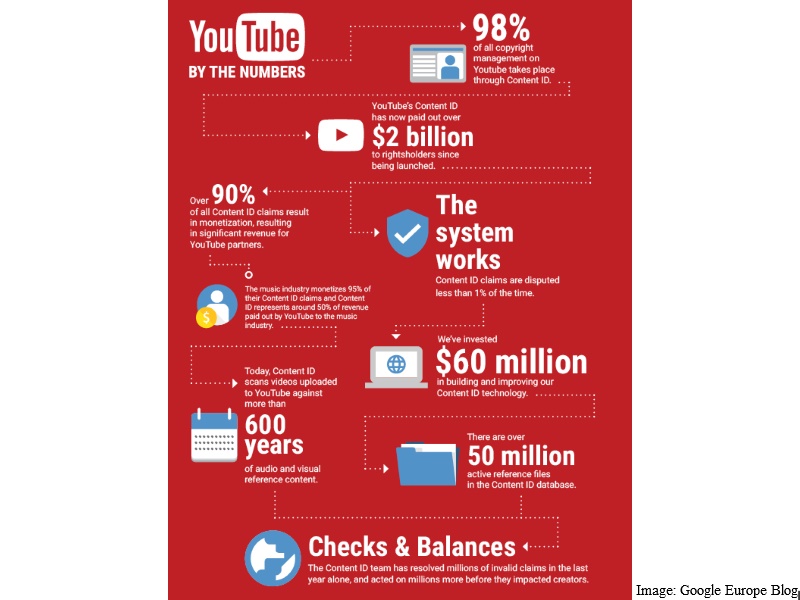 Google said Wednesday its efforts to fight online piracy have yielded $2 billion (roughly Rs. 13,409 crores) paid out to copyright holders whose content is shown on its YouTube platform.

The US online giant, updating its anti-piracy efforts, said its system has been generating income for copyright holders when content is posted to YouTube.

At the same time, Google is also offering “more convenient, legitimate alternatives” that allow consumers to buy music, films and other content, according to a statement.

Google and YouTube have been using a system called ContentID, where a copyright holder can notify the company if its music or other content is being shown on YouTube.

The copyright owners have an option to remove the content or leave it up and reap advertising revenue from it, and 95 percent of music owners choose the latter option, according to Google.

Another part of the effort to combat online piracy, Oyama said, is filtering search results.

“Thanks to the efforts of Google’s engineers, the vast majority of media-related queries that users submit every day return results that include only links to legitimate sites,” she said.

Google is also cutting out sites specializing in piracy from its advertising network.

“Rogue sites that specialize in online piracy are commercial ventures, which means that one effective way to combat them is to cut off their money supply,” Oyama said.

“As a global leader in online advertising, Google is committed to rooting out and ejecting rogue sites from our advertising services. Since 2012, Google has blacklisted more than 91,000 sites.”

She added that Google has paid out some $10 billion (roughly Rs. 67,051 crores) to creators for content purchased on Google Play and YouTube.