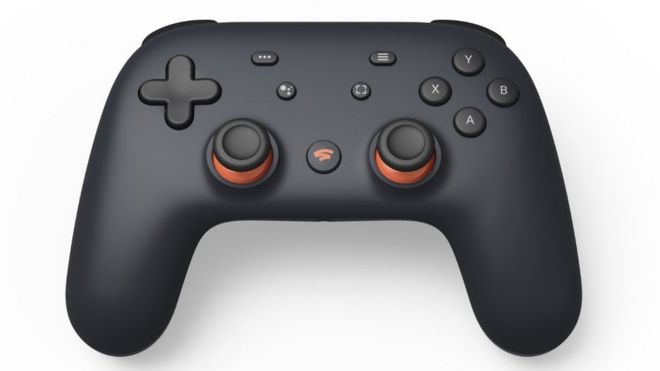 Google has revealed more details about its new video gaming platform, Stadia, which was first announced in March.

Stadia is a cloud gaming platform – so instead of buying a games console, discs and downloads, players can stream games over the internet.

The service will launch in November with a limited edition starter pack for early adopters.

Studios such as EA and Bethesda will provide games but big developers, such as Epic Games, are still missing.

How will Stadia work?

Stadia games will run on servers at Google data centres around the world, with the video footage streamed to a TV.

The company says that will give gamers over 10 teraflops of graphics processing – more than Xbox One and PS4 combined.

But it remains to be seen how well it will work in the real world. Google has not let the BBC try Stadia yet. It is showing the service to journalists at the E3 gaming show in June.

Google says that to stream games in ultra-high definition 4K, players will need an internet connection that can deliver download speeds of 35Mbps and upload speeds of 1Mbps.

The company recommends a speed of at least 10Mbps to stream games in a lower resolution.

How much will it cost?

The only way to try Stadia when it launches in November is with the starter pack, which will cost £119 or $129 in the US.

It includes a dark blue Stadia controller, a Chromecast Ultra TV stick and a three-month subscription to Stadia Pro.

That subscription lets players stream games from the included library in 4K.

But not all the games on Stadia will be included in the subscription streaming library. Some of the most recent titles will have to be purchased separately.

From 2020, the company will offer the controllers separately for £59, and a Stadia Pro subscription for £8.99 a month.

Players who choose not to subscribe will be able to buy individual games but will be limited to streaming in high definition rather than 4K.

What games will be available?

Google says there will be at least 30 games at launch, from big studios such as Bethesda, EA Games, Rockstar, Sega, Square Enix, Warner Bros and Ubisoft.

Some of the big titles include Doom, Destiny 2, Final Fantasy XV, Rise of the Tomb Raider, Assassin’s Creed Odyssey, and Tom Clancy’s The Division 2.

However, some big studios such as Activision Blizzard, which makes Overwatch, and Epic Games, which makes Fortnite, are not on board yet.

That means some of the world’s most popular games are missing from Stadia at the moment.

“Major exclusives will be key to driving consumer awareness of and desire to adopt cloud gaming services,” said Piers Harding-Rolls from the IHS Markit consultancy.

“With the selection of content on offer, Google has not yet demonstrated that it will be better placed to engage gamers than the established console and PC storefronts.”

Low latency is very important to make gaming smooth and responsive. How are you achieving low latency?

Well, we did a very successful test of our technology back in October, testing one of the most advanced and sophisticated games that we could make available at the time, which was Assassin’s Creed Odyssey. We’re building our physical data centres as close to the population as we can, so we reduce the impact of latency. And we are putting some very custom technology that we have designed in the data centre to compress data – but do it in a way that gives an incredible quality and experience.

Are you nervous going up against Sony, Microsoft and Nintendo?

No, it’s exciting. I mean, we wouldn’t be here without the work and an incredible success of other platforms that have come before us. But we want to take the industry to the next level, we want to make gaming available for the widest number of people possible, and to bring gaming experiences to people who wouldn’t normally be able to get the latest hardware in their home. And that’s an exciting prospect. We won’t do it overnight. But we’re very, very dedicated to this.

Google has a habit of getting bored of a service or, if it’s not doing too well, just switching it off. Can you assure people that if they spend money on Stadia games, they are still going to have access to them in the coming years?

I completely understand the question. I think there’s a couple of things I would answer to that. One is our commitment to this business is extraordinary. If you look at the list of games, and crucially, the list of game companies that are backing Stadia, you can see the level of interest and support. Google is committed to this for the long term, we have made very significant financial investments in this. And we have an incredibly dedicated team who is helping to make Stadia reality.

Is the move from everybody having a console in the house to us playing on supercharged Google data centres going to be more energy efficient?

You’re taking on some giants in the industry. What for you will success look like a year or two down the road?

Very simply, happy gamers – people who love playing on Stadia, who bring their friends and have a great experience and start to feel what it’s like to get rid of that old bit of hardware in your home and just be playing the latest, greatest games without any of the administration that comes with playing games today.