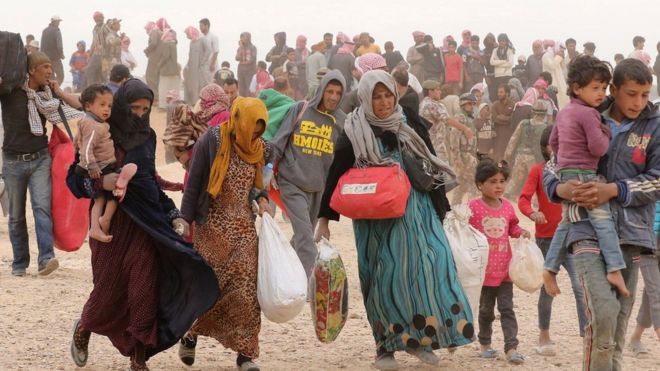 More than 200 religious leaders have urged the UK to relax immigration rules so refugees from Syria and other areas can be reunited with their families.

In a letter to the prime minister, they say close relatives of Britons and refugees already in the country are living abroad in “desperate conditions” and should be given a legal route in.

Ministers say the UK has been at the head of the response to the crisis.

Former Archbishop of Canterbury Rowan Williams is among representatives from the Buddhist, Christian, Jewish, Hindu, Muslim and Sikh faiths to have signed the letter to Theresa May.

The signatories, who are acting in a personal capacity, also include Baroness Rabbi Julia Neuberger and Muslim Council of Britain secretary general Harun Rashid Khan.

The letter calls on the government to “urgently revise its policy” to help refugees fleeing Syria, Iraq and other areas of conflict “by adopting fair and humane family reunion policies”.

The letter says: “Under the present immigration rules, a British doctor of Syrian origin could not bring her parents from a refugee camp in Lebanon – even though they were refugees and she could support and house them.

“A Syrian child who arrived alone in the UK could not bring his parents from a refugee camp in Jordan – even if the child were recognised a refugee and even though his parents were themselves refugees.”

Families of refugees, they add, “can currently be reunited only by resorting to desperately unsafe irregular journeys, sometimes ending in avoidable tragedies”.

Speaking to Radio 4’s Today show, Baroness Neuberger said the group decided to write the letter due to what she called “anti-immigrant” debate during the referendum campaign “confusing refugees with economic migrants and migration in general”.

She also said the group was particularly concerned about “child migrants both in Greece and in Calais, who have relatives in the UK who could care for them and still aren’t able to get here”.

“They have to go through a very slow administrative procedure. With Britain’s reputation for being welcoming, we could simply speed the process up and deal with it. [It’s] very slow, and some of them will disappear before it even happens.”

She added: “The UK has taken something like 3% of refugees coming through into Europe, and I think we could do better than that and take more like a fair share,” she added.

While Baroness Neuberger would not confirm how many refugees the signatories think the country should accept, she said they were “talking about the difference between a few thousand and either a few hundred thousand or at least many tens of thousands”.

She also emphasised that the group was not worried about whether there would be any issues with integration and said: “In previous years we have taken more, and we haven’t had a huge problem with integration.”

“If we could get family reunion policies changed… and we could show that the people in the UK are willing to take refugees and it is a different issue from migration in general, those things would help.”

Last week, Home Secretary Amber Rudd said the UK was on track to deliver the promise made by former Prime Minister David Cameron to resettle 20,000 Syrian refugees by 2020.

The government says it is also committed to accepting 3,000 unaccompanied children registered in France, Italy and Greece.

But the faith leaders highlight an open letter last October from 350 lawyers and former judges criticising the government response as “too low, too slow and too narrow” and calling on it to adopt new policies to help refugees.

Similar letters were later published by leading economists and humanitarian and refugee organisations including Oxfam, Amnesty International, the Refugee Council and Christian Aid.

Rabbi Danny Rich, chief executive of Liberal Judaism, told the BBC: “We are asking the government to show compassion and also some common sense because if you have half a refugee family here they can’t be as well settled, as well absorbed, as if they were a full family.”

Qari Asim, chief imam of the Makkah mosque in Leeds, said: “Many refugees with close family members in the UK are risking their lives trying to escape deplorable conditions.”

Last month, the government won an appeal against a ruling which allowed four Syrian refugees living in the so-called Jungle camp in Calais to live with relatives already in the UK.

The Bishop of Barking, Peter Hill, who was involved in that case and added his name to the letter, said: “The system is broken and the Home Office must establish a functional system which delivers now, without bureaucratic delays.”

A Home Office spokeswoman said: “The UK has been at the forefront of the international response to the humanitarian crisis in Syria.

“We are also in active discussions with the UNHCR, other partner organisations and the Italian, Greek and French governments to strengthen and speed up mechanisms to identify, assess and transfer unaccompanied refugee children to the UK where this in their best interests.”