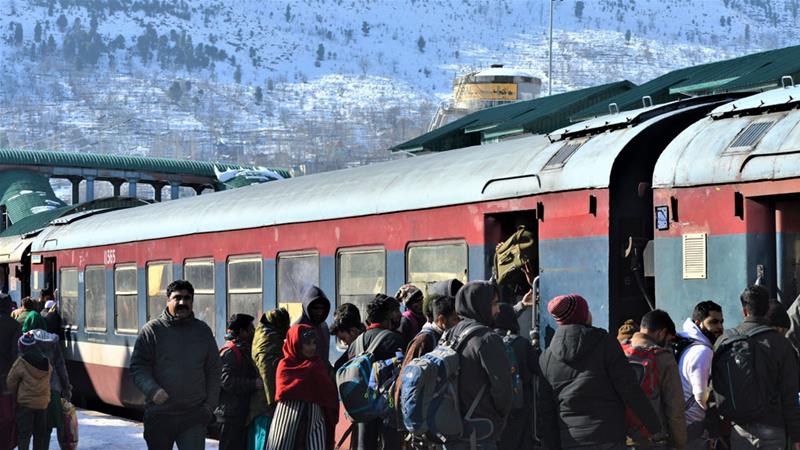 Braving the snow and cold, Abrar Ahmad, 18, is one of the thousands of Kashmiris who regularly spend hours journeying on a packed train just so that they can go online as the region grapples with the longest internet blackout imposed by the federal government.

Stepping off the crammed train – dubbed the “Internet Express” by Kashmiris – in the town of Banihal, about 100km (approximately 60 miles) south of the main city of Srinagar, the passengers make a beeline for cafes where they pay up to 300 rupees ($4.20) for hourlong broadband access.

“I couldn’t have afforded to miss this opportunity,” Ahmad told the Thomson Reuters Foundation after filling out an online job application at a teeming internet cafe, where dozens of others hit by the 162-day internet shutdown queued behind him.

“There is no one else in my family to take care of my three younger siblings and me,” he said, adding that his father, a mason, lost his leg in a road accident last year.

Indian-administered Kashmir has been without broadband and mobile data services since August 5 when the Indian government revoked the special status of its only Muslim-majority region, splitting it into two federally administered territories. Despite a United Nations declaration in 2016 that the internet is a human right, shutdowns have risen in recent years as governments from the Philippines to Yemen said they were necessary for public safety and national security.

Kashmir is claimed in full by both India and Pakistan, which have gone to war twice over it. Each rules parts of the scenic Himalayan region.

India said it cut communications to prevent unrest in Kashmir, where an armed rebellion has killed more than 60,000 people since 1989.

The lockdown has cost Kashmir more than $2.4bn since August, with sectors directly dependent on the internet such as e-commerce and information technology worst hit, the region’s main trade organisation said.

“Doing trade without the internet is unimaginable in the present-day world,” said Abdul Majeed Mir, vice president of the Kashmir Chamber of Commerce and Industry, which estimates nearly 500,000 jobs have been lost.

“Irreversible damage has been caused to the economy.”

“Punishing an entire population on the basis of saying potential violence or terrorism might occur is extraordinary,” said Chima.

The home and information ministries did not respond to requests for comment.

At a noisy cybercafe in Banihal, Danish stepped out to catch his breath as people elbowed past to get on the web. Diesel generator fumes filled the cramped space to keep computers and laptops running during frequent power cuts. “I felt suffocated inside,” said Danish, a Kashmir University scholar who declined to give his full name.

“This internet gag is driving me crazy.”

But he prefers the lengthy trek to Banihal to trying to get online at one of the hundreds of internet kiosks the government has set up in Kashmir, where demand hugely outstrips supply.

New Delhi said the scrapping of Kashmir’s autonomy granted by the constitution’s Article 370 was necessary to integrate it into the rest of India and spur development.

It has done anything but that, say locals.

Outside a courier company in Srinagar, two delivery executives chatted idly by a bonfire, saying no internet meant no packages.

“We are the only two who still come to the office. Some 50 boys have lost their jobs,” said Touseef Ahmad.
“If the internet is not restored soon, I can lose my job.”

Tourism – for decades the backbone of the scenic region’s economy – has been badly hit.

Every year, people from across India flock to Kashmir to enjoy its snow-capped mountains and scenic Dal Lake, home to hundreds of ornately-carved houseboats whose owners rely on tourism.

Bashir Ahmad Sultani, president of Kashmir’s Shikara (Boat) Association, said there was no work for more than 4,000 boatmen.

“We are going through very bad times. Some of us are not even able to arrange two square meals for our families,” said boatman Mohammad Shafi. “We are looking at a dark future.”

The restriction has served a huge blow to tour operators, hoteliers and artisans as well.

“I mostly buy things on credit from local shopkeepers,” said Ghulam Jeelani, a hotel manager in Srinagar, who feared being laid off with no online bookings or transactions.

Jeelani, 52, said he has been struggling to pay for his daughter’s tuition and daily groceries since his monthly salary was slashed by three-quarters to 6,000 rupees ($84) in October.

“I have been told that I can’t get even this amount if tourists don’t start arriving in a few weeks,” he added.
The government has not said when the internet will be restored, despite calls from civil society and the UN.

On Friday, India’s Supreme Court ordered authorities to review the suspension of internet services in the region within a week.

“Suspension of free movement, internet and basic freedoms cannot be an arbitrary exercise of power,” the court said.

Without it, many locals say they may have to take up manual jobs such as on construction sites – or even pack up and leave.

But for Danish, the Kashmir University scholar, frequent trips to Banihal are the only way forward.

“I would have moved to some other city but I can’t because my [supervising] professor is in Kashmir. How can I exchange emails with him when there is no internet,” he said.

“Such a long blackout … amounts to playing with our future. We are losing precious time.”