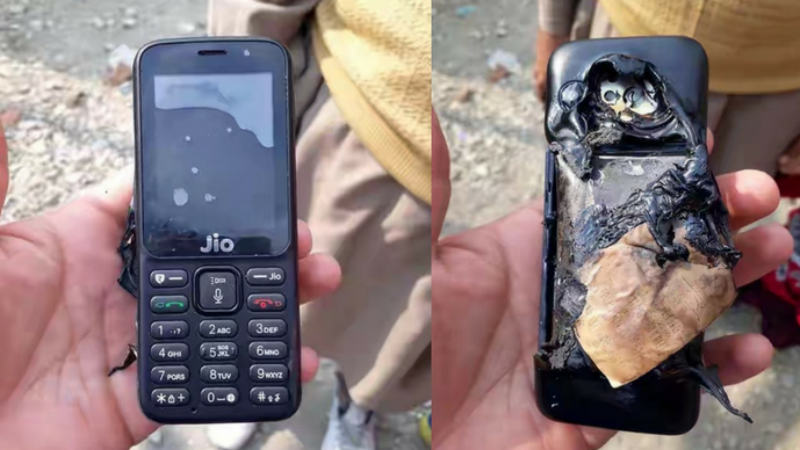 Jio Phone is yet to become widely available for the public to purchase, but there’s already an alleged case of the handset exploding. Last year, a Reliance Lyf smartphone had exploded and burst into flames too. Reports of the Jio Phone exploding come with many handset manufacturers, , including Samsung, Xiaomi, and Apple, are grappling with cases of their smartphone catching fire spontaneously. In a statement to Gadgets 360 on the matter, a Reliance Retail spokesperson said the company is aware of the incident, and found in its initial investigation that the damage has been caused by intentional sabotage. The Twitter account that first posted the image has deleted the tweet.

According to a report by technology blog Phone Radar, the Jio Phone explosion happened in Kashmir. The now-deleted image on Twitter shows the back panel of the phone has been melted but the battery underneath the casing seems to be intact. The front panel also doesn’t have any bearings of an explosion. The blog claims to have access to a photo of the phone’s charger, and its wire is supposedly also melted. Citing a Lyf distributor who checked the device, the report says the battery is remains operational.

In a statement, a Reliance Retail spokesperson said, “Jio Phones are designed and manufactured with global standards, and each phone goes through stringent quality control process. The said incident has been reported to us. Our initial investigation suggests that this is a case of intentional sabotage. The damage to the device seems to have been intentionally caused. The incident, as well as its timing, has been designed by vested interests to malign the brand. We will take appropriate action based on further investigations.”

Jio Phone is expected to slow down the switch from feature phones to smartphones courtesy its smartphone-like features at zero ‘effective price’; buyers need to pay Rs. 1,500 as deposit at the time of delivery. Its highlight is the access to 4G Internet and availability of movie, music and video streaming apps. In fact, since the launch of Jio Phone, other telecom operators have partnered with handset makers to bring phones bundled with freebies. These include Airtel and Karbonn’s A40 Indian Android smartphone and BSNL and Micromax’s Bharat-1 4G feature phone.