Last month Marshmallow got past 10% market share for the first time. And now a new State of Android report is available from Google. As you’d expect, Marshmallow just kept on growing. It’s now 13.3% of the Android pie, up 3.2% in a month or so.

That said, it’s still unfortunately nowhere near Lollipop or KitKat in terms of distribution. The two Lollipop releases still have 35.1% of the market combined, while KitKat’s share is 30.1%. Both are down slightly, but not by enough to actually make a big difference – at this rate, Marshmallow won’t be the most widespread version of Android for at least another half year. 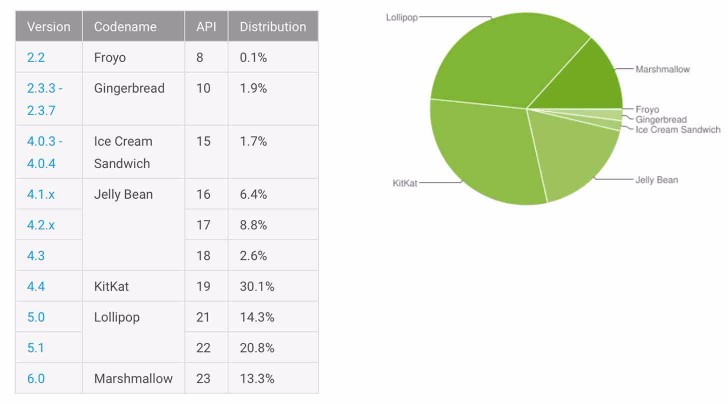 For some reason there still are devices out there, actively being used, with ancient Android releases such as Jelly Bean, Ice Cream Sandwich, Gingerbread, or even Froyo installed. The user experience for any of these iterations of the OS has to be abysmal in 2016, but people are sticking to what they have.

Froyo is thankfully almost extinct, but Gingerbread still accounts for 1.9% of the Android market, and Ice Cream Sandwich for 1.7%. Jelly Bean is at 17.8% and shows no signs of dying anytime soon – it’s got more market share than Marshmallow actually.