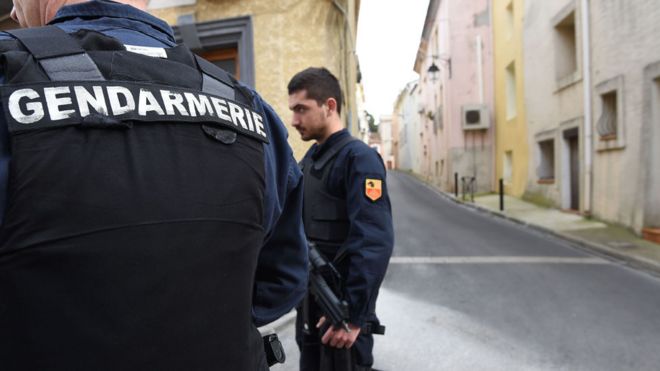 An “imminent” terror attack on French soil has been averted with the arrest of four suspects in Montpellier, Interior Minister Bruno Le Roux said.

Three men and a girl of 16 were found with bomb-making materials by anti-terrorist police in a raid on a flat in the southern city.

Home-made explosives similar to those used in the Paris attacks of November 2015 were discovered.

Reports suggest the girl had made jihadist declarations online.

Since the beginning of 2015, at least 230 people have been killed in jihadist attacks in France.

Last week, a soldier received minor injuries when a machete-wielding man tried to enter the Louvre museum in Paris.

The man, a 29-year-old Egyptian named Abdullah Hamamy, was shot and critically injured.

Photos from the scene in Montpellier show debris outside the door of the flat that police stormed on Friday morning.

Early reports suggested that one of the Montpellier detainees was a would-be suicide attacker.

A local news site, M6 Info, said the four were planning to attack a tourist site in Paris but a police source told AFP news agency that investigators had not been able to establish the exact target.

The suspects were arrested after buying acetone, a police source told AFP. Acetone is an ingredient used in the making of triacetone triperoxide (TATP), a high explosive.

TATP, the same explosive used in bomb vests worn by militants in the Paris attacks, was found in the city along with the acetone, a judicial source said.

According to AFP, the female suspect had been spotted on social networks saying she wanted to leave for the Syria-Iraq conflict zone or mount an attack in France instead.

She recorded a video in which she pledged allegiance to so-called Islamic State (IS), M6 Info reports.

Meanwhile, France’s top constitutional court struck down a law which penalised those who consult jihadist websites.

The Constitutional Council found that the law infringed on people’s freedom of communication unnecessarily.

Separately, prosecutors in Denmark charged a 16-year-old girl with attempted terrorism for allegedly planning to bomb two schools in and around Copenhagen, one of them Jewish.

The girl, a convert to Islam, was arrested in Kundby, near the capital, in January last year, and had been held in custody ever since.

Prosecutors believe she was trying to prepare TATP herself. She will go on trial in Holbaek in April.

A 25-year-old man arrested in the same case has been released without charge.