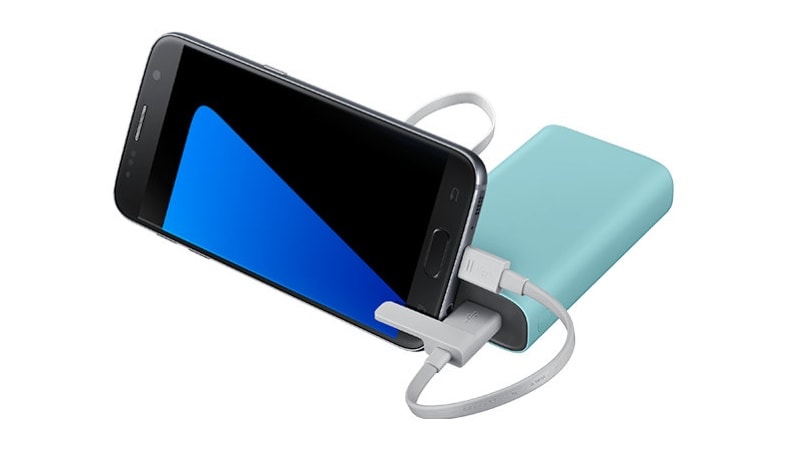 Earlier this month, Samsung came up with a 5100mAh fast charging battery pack that the company advertised for its latest flagship smartphones, Galaxy S8 and Galaxy S8+. The South-Korean giant has now launched a new battery pack that it likes to call ‘Kettle Design’. As the name suggests, the battery pack (available in two battery capacities – 5100mAh and 10200mAh) is shaped like a kettle that doubles as a kickstand for your smartphone while charging it.

The Samsung Kettle Design battery packs are priced at $29.99 (roughly Rs. 1,940) for the 5100mAh capacity and $39.99 (roughly Rs. 2,580) for the 10200mAh capacity and are available in Mint Blue colour in the US.
As a highlighted feature, the Samsung Kettle Design battery pack is unlike standard power banks in terms of design. This battery pack comes with a kickstand cable that doubles as a stand for your smartphone that you can affix at your preferred viewing angle. It also has a wrist strap for easy handling. As we mentioned, the battery pack comes in two capacities – 5100mAh and 10200mAh. The former version features one USB Type-A port for power output and one Micro-USB port for the charging input, whereas the latter version has two USB Type-A ports and a single Micro-USB port.

In addition, the Samsung Kettle Design battery pack has an LED bar battery status indicator. The battery pack takes a power input of 5 Volts at 2.0 Amperes while giving an output of 5 Volts at 1.8 Ampere (2.8 Ampere when charging through two USB ports in 10200mAh variant). The 5100mAh battery pack can support all types of smartphones for charging but the higher capacity 10200mAh version has a compatibility limited to Samsung Galaxy S7, Galaxy S7 edge, Galaxy S6, Galaxy Note 5, and Galaxy Note 4. However, this does not mean the battery pack will not charge smartphone other than compatible ones. The retail box contains the Kettle Design battery pack, kickstand-shaped charging cable and manuals.
[“source-ndtv”]