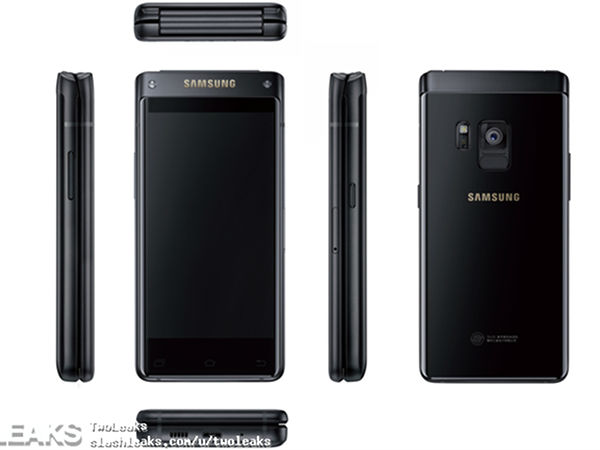 Reportedly, it will be a flagship meant exclusively for the Chinese market. Carrying the model number SM-W2018, the Samsung phone will be a flip phone. A successor to last year’s SM-W2017, the upcoming smartphone will also sport the old-school clamshell design. Recently, we came across a report revealing its alleged specifications. Today, a press render of the Samsung SM-W2018 has surfaced online, thanks to Slashleaks. The picture shows the device from all the angles. As you can see, it sports a single camera lens that is accompanied by a LED flash. As far as the specifications are concerned, the Samsung SM-W2018 is speculated to come with a Qualcomm Snapdragon 835 processor along with 6GB of RAM. It is also said that the upcoming smartphone will have a 4.2-inch Full HD display. We assume Samsung will incorporate an AMOLED panel to offer vibrant color reproduction. In terms of optics, the smartphone could feature a 12MP rear-facing camera equipped with Optical Image Stabilization (OIS) as well a 5MP selfie shooter at the front. Storage-wise, the Samsung SM-W2018 is likely to offer 64GB of built-in storage capacity. Powering the device will be a relatively smaller 2,300mAh battery unit. The battery size is quite disappointing as compared to the rest of the features. However, since the device has a small display, the battery could last for a longer period of time than expected. The Samsung SM-W2018 has already received certification from TENAA and FCC. So the launch is imminent. While we have said earlier that the phone will be released only in China, Samsung may decide to introduce it to other countries as well. Other than that, we have no information on the pricing details.