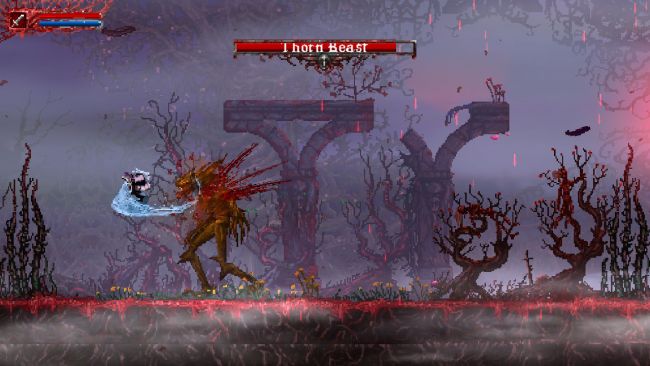 Slain! attracted quite a bit of attention in the lead up to its launch, and rightly so: in motion it looked really cool. The hard-as-nails, 16 bit-inspired sidescroller looked like a death metal album cover come to life, and the soundtrack sounded the part too, composed as it was by a former member of cult band Celtic Frost.

Unfortunately, when it launched back in March, the response was less than favourable. People criticised its movement, its difficulty, and… well, most aspects of the game. That prompted Wolfbrew Games to completely overhaul the game, and the results of their attention have launched today as Slain: Back From Hell.

According to the announcement, not much has been left unchanged. The changenotes say that the “difficulty curve has been completely re-calibrated”, checkpointing has been “re-regulated to allay difficulty spikes” and enemy AI has been overhauled to allow for “more complex and challenging behaviours for nearly all enemies”.

Meanwhile, there are three new bosses, combat has been changed, and weapons can be switched on the move. For the full list of updates, head over here. As you’ll see, they’re quite substantial.

It’s interesting that a lot of the changes reduce the difficulty, because Slain was originally delayed because it was too hard. I hate to think how hard the game was before that delay, but whatever the case – now seems to be the time to jump aboard. Everyone who owns the game will be gifted a new copy as well, to pass on to a friend.