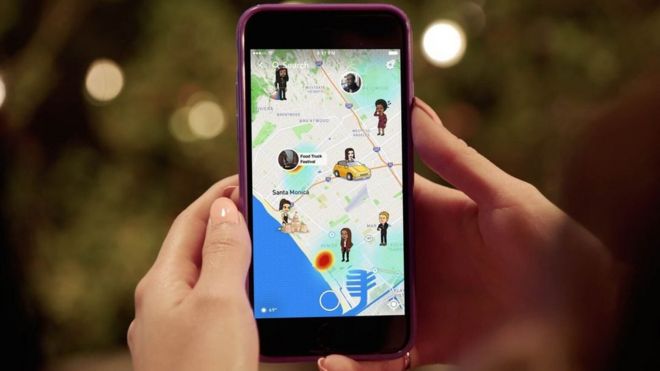 An update to Snapchat that shows publicly posted images on a searchable map has raised safety concerns among parents.

Snap Map lets people search for places such as schools and see videos and pictures posted by children inside.

It also lets people locate their “friends” on a map that is accurate enough to determine where people live.

Snap, the company behind Snapchat, stressed to the BBC that location sharing was an opt-in feature.

Snap Map was launched on Wednesday and was promoted as a “new way to explore the world”.

Video clips and photos that members have posted publicly can be discovered on the map, while members who have chosen to share their location can also be seen on the map by those they have added as “friends”.

A message to parents posted by St Peter’s Academy in Staffordshire warned that the location-sharing feature lets people “locate exactly where you are, which building you are in and exact whereabouts within the building”.

One parent described the update as “dangerous” while another said she could not find the setting to disable it.

People have expressed concern online that the app could be used for stalking or working out exactly where somebody lives.

“If you zoom right in on this new Snapchat map thing it literally tells you where everyone lives? Like exact addresses – bit creepy no?” wrote one user called Leanne.

Snap told the BBC that accurate location information was necessary to allow friends to use the service to meet, for example at a restaurant or crowded festival.

It said points of interest on the map, such as schools, were provided by third-party mapping service Mapbox.