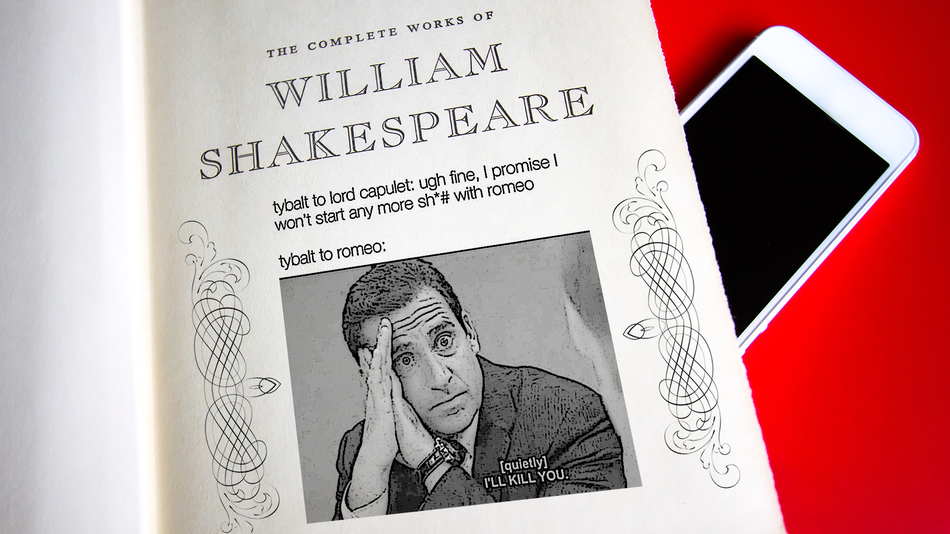 Most millennials know SparkNotes as the ultimate no-nonsense study buddy, but today’s students not only receive help with schoolwork from the website, they get high-quality entertainment, too.

SparkNotes remains a crucial tool for text comprehension — full of study guides and supplemental resources on english literature, philosophy, poetry, and more. But over the past two years it’s also become a source of some of the internet’s most quick-witted, thought-provoking, and ambitious memes.

SparkNotes’ Twitter and Instagram accounts have carved a unique niche for themselves online by posting literary memes that find perfect parallels  between classic works like Macbeth, The Great Gatsby, Lord of the Flies, and Frankenstein, and present-day pop culture favorites like The Office, Parks and Rec, and more.

It may come as a surprise to those who once frequented the site for the sole purpose of better understanding Shakespeare plays before a final exam or catching up on assigned chapters of The Catcher in the Rye before the bell rang, but SparkNotes is cool now, and absolutely killingthe social media game.

As someone who spends the majority of her workday on the internet and splits her leisure time almost exclusively between reading books and re-watching episodes of The Office, I fell in love with the account’s near-perfect meme execution after mere minutes of scrolling through posts.

In a world with so many bad brand tweets and tone-deaf memes, I felt compelled to seek out the well-read meme masters behind SparkNotes’ social media to learn how it is they manage to make each and every post so good.

Chelsea Aaron, a 31-year-old senior editor for SparkNotes, is a huge part of the success. She started managing the site’s Instagram in September 2017, and her meme approach has helped the account grow from 5,000 to 134,000 followers.

“When I first started managing the account, I tried a bunch of different things,” Aaron explained in an email. “I ran illustrations and original content from our blog, and I also borrowed memes from our Twitter … The memes seemed to get the most likes, so I started making and posting those on a regular basis, and now I try to do four to five per week.”

Aaron discovered the account’s recipe for success by not only making memes about some of SparkNotes’ most popular, highly searched guides — which include Shakespeare’s plays, The Great Gatsby, and Pride and Prejudice — but by mashing them together with a few modern television shows that she’s personally passionate about, such as The Office, Parks and Rec, Arrested Development, and John Mulaney’s comedy specials. She’s also known for hilariously retelling entire works (SparkNotes style, so, abridged versions) using the account’s Highlight feature.

The brilliantly sharp, comical posts seem effortless, but Aaron explained the process takes some serious concentration. Essentially, she stares at a large collection of collected screenshots “in a state of panic” until an idea strikes. “It’s wildly inefficient and incredibly stressful, but I haven’t figured out another way to do it,” she admitted.

Luckily, Aaron always has the SparkNotes Twitter account to turn to for inspiration, which is managed by Courtney Gorter, a 26-year-old consulting writer for SparkNotes who Aaron calls “a comedic genius.”

“I wanted this stuff to seem slightly more fun to the average stressed-out student.”

Gorter has been managing the Twitter account for about a year and a half now, and joined the SparkNotes team because she utilized its resources growing up and wanted to help “make classic literature feel accessible” to others.

“I wanted this stuff to seem slightly more fun (or, at the very least, less intimidating) to the average stressed-out student who’s just trying to read fifty pages by tomorrow and also has a quiz on Friday,” she said. The memes definitely help her achieve that goal.

Scrolling through the SparkNotes Instagram account, you notice it generally uses a recurring but reliably satisfying meme format. Most of the posts consist of a white block filled with introductory text and a screenshot from a television show, like so.

Gorter, on the other hand, ensures the Twitter account showcases a far more widespread representation of the internet. She posts everything from out-of-context screenshots, GIFs, and videos, to altered headlines from The Onion and trending meme formats of the moment, like “in this house” memes, “nobody vs me” memes, and more. The account is full of variety and gloriously unpredictable.