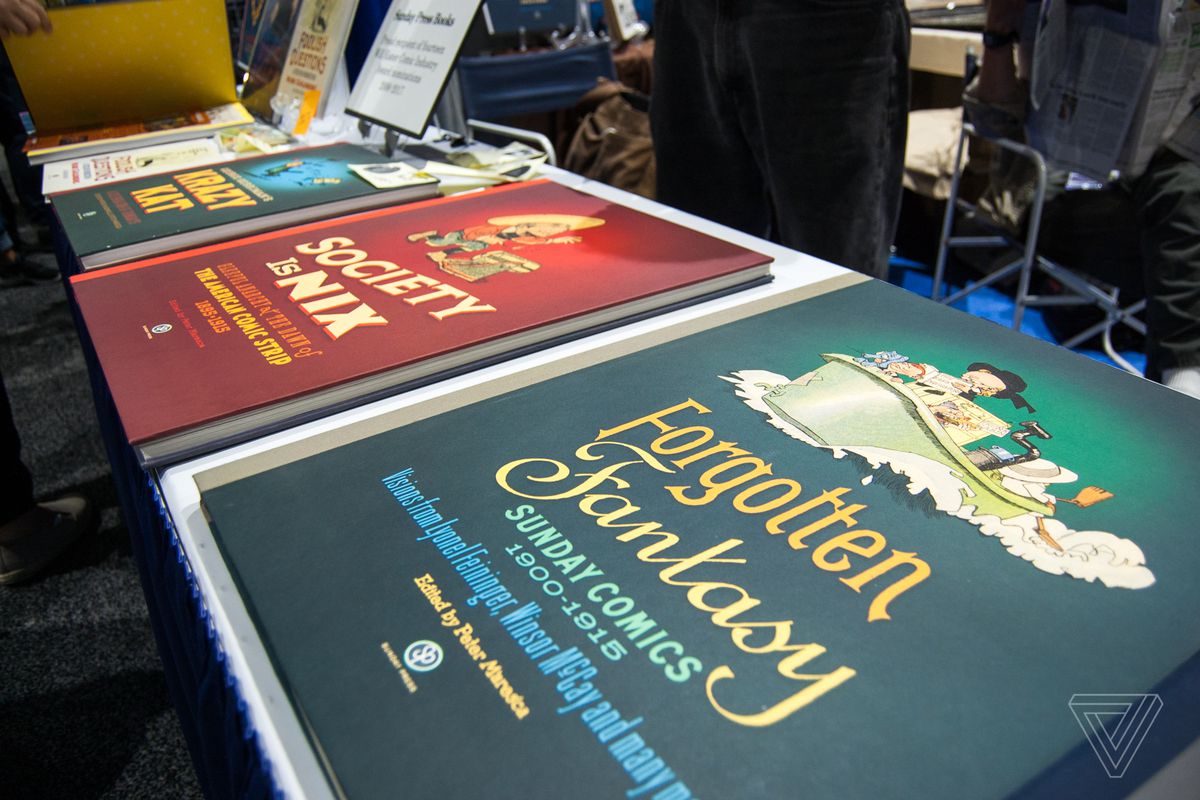 Walking around at San Diego Comic-Con, the booth for a small publisher known as Sunday Press stands out in the quieter half of the convention. Standing amidst retailers hawking bagged rarities and boxes of superhero comics, the books on display are distinctive: they’re massive — almost two feet to a side — and they bear names like Dick Tracy: Colorful Cases of the 1930s, White Boy in Skull Valley, Society Is Nix, Gleeful Anarchy at the Dawn of the American Comic Strip, and others. The outfit is run by Peter Maresca, a comic collector-turned publisher who describes himself as a “discount archivist,” and who has earned recognition from the broader comic community for his efforts producing amazingly beautiful restorations of the comics that kicked off the entire industry.

As con-goers pass by the booth, Maresca talks to the one or two who stop by, providing a detailed history lesson behind some of the books on display. He explains that he has been collecting classic comics since he was in his 20s, acquiring complete runs of some of the stories, including a strip called Little Nemo in Slumberland, illustrated by Winsor McCay. That strip debuted in 1905 in the New York Herald, and it’s been held up as an influential story by numerous creators, including Maurice Sendak, Alan Moore, and Neil Gaiman.

But a century after they were first published, those original comics were deteriorating badly. Maresca realized that he had an opportunity to honor the comic and its creator for its centennial. He had a full run of the series, and could assemble a collected edition that would restore and reintroduce the comic to fans and newcomers alike. Importantly, he wanted to recreate the look and feel of the original comic, which included its massive size. Publishers thought it was a neat idea, but ultimately passed on the project.

So Maresca decided to publish the book himself.

“The goal,” he explains, “was to recreate the experience of reading the original comics” when they were first released.

Maresca mused that many have predicted that computers would eventually replace old-fashioned reading, but explained that it was computers and software that allowed him to restore the century-old cartoon for a modern audience.

While the comics had received retrospective treatments and reprints, he explains that these were often small reproductions, which made the fine details difficult to see. But he wanted to do more than just showcase the art.

“What I originally wanted to do,” he says, “was to give people the opportunity to experience the comic strips they had been a hundred years ago, which is impossible to do with the smaller books.”

In the century since they were published, the original comics have aged with time, yellowing and tearing. This presented Maresca with a challenge: he wanted to replicate the original experience, so he turned to Photoshop. Each page was scanned in two parts, which he then stitched together. From there he set about adjusting the colors and removing the wear and tear that they’d accumulated over the years. Some imperfections remained, like the ink smears that the comics originally came with.

Once he cleaned up the panels, Maresca created a new background that resembled the texture of newspapers from the early 1900s, so that each page would be consistent, and then dropped the panels in.

“I tried to keep the warm colors of the strip, without having to have a totally faded out background,” he says. “It’s a bit of a hybrid between a brand new newsprint and a comic strip that looks kind of faded.”

Once he completed his post-production work, Maresca shipped the digital files to a printer in Malaysia, which could print the files directly from the PDF in 11 colors — something that wasn’t possible before. From there, the large nature of the book meant that it had to be hand-stitched.

The final product is a book that approximates what the comic would have looked like when it was first published, in size and in color. “People say that the books are too big for a bookshelf,” Maresca jokes, “so I suggest sliding it under the sofa, and on Sunday morning, pull it out and read a page or two on the floor.” He goes on to say that he’s gotten a number of comments from people who say that the books bring back memories for people, making them feel as though they’re six years old, leaning over a colorful page of cartoons on after the paper arrived.

Maresca set up Sunday Press as his own publishing company, and produced his first run of the books, which promptly sold out after a positive review in The New York Times, and set about producing his next project, a similar treatment of another McCay cartoon, Little Sammy Sneeze. In the years since, he’s gone on to produce twelve books in all, earning 14 Eisner nominations and two wins.

While popular in their day, these are comics that have largely been forgotten by all but dedicated fans and industry professionals. The books produced by Sunday Press help restore these comics for a new generation of fans and students. With the advances in printing and photo manipulation in recent years, the earliest comic books will be easily accessible for the next generation of cartoonists.

“So much talent and creativity went into these stories,” Maresca says. “That shouldn’t be forgotten.”