US military tests swarm of mini-drones launched from jets 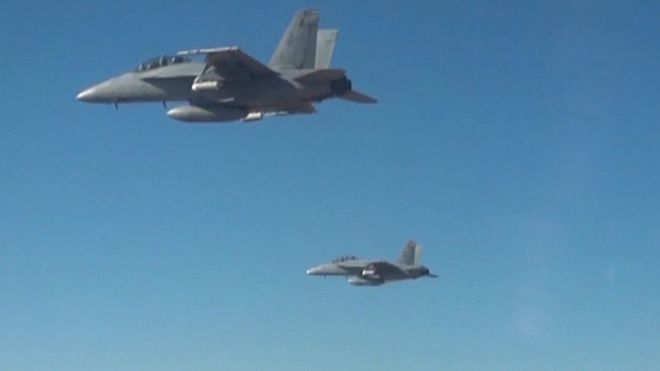 The US military has launched 103 miniature swarming drones from a fighter jet during a test in California.

The drones, which have a wingspan of 12in (30cm), operate autonomously and share a distributed brain.

A military analyst said the devices, able to dodge air defence systems, were likely to be used for surveillance.

Video footage of the test was published online by the Department of Defense.

“Perdix are not pre-programmed synchronised individuals, they are a collective organism, sharing one distributed brain for decision-making and adapting to each other like swarms in nature,” said William Roper, director of the Strategic Capabilities Office.

“Because every Perdix communicates and collaborates with every other Perdix, the swarm has no leader and can gracefully adapt to drones entering or exiting the team.”

The drones were originally designed by engineering students at the Massachusetts Institute of Technology and were first modified for military testing in 2013.

“When looking at how you deal with air defence systems that are optimised to spot very large, fast-moving aircraft, small, cheap disposable drones seem to be one solution,” said Elizabeth Quintana, at the Royal United Services Institute, a military think tank.

She added that the system would probably be used for surveillance purposes in the near term.

In May, the US Navy tested a system that could launch drones into the sky for rapid deployment.

Ms Quintana pointed out that China had significant resources both in electronics and drone-manufacturing.

The world’s best-selling consumer drones are made by DJI, a Chinese company.

“They have a tremendous amount of expertise in the country,” she told the BBC.

“It’s going to be very interesting – it won’t just be about who has the biggest swarm but also about who can out-manoeuvre who.”