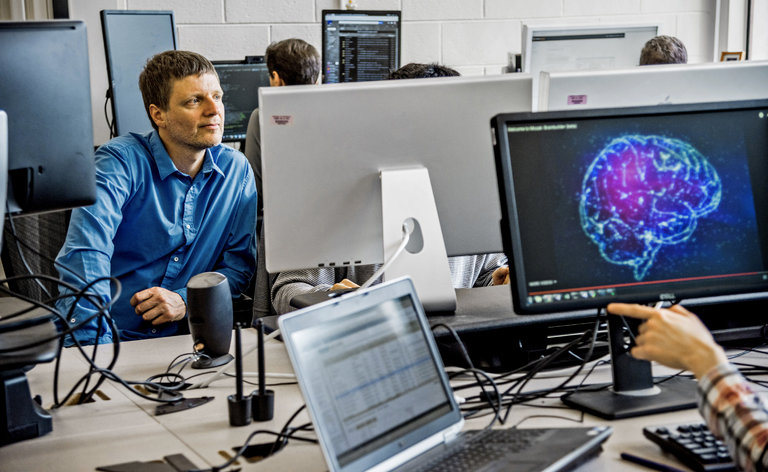 The results from “Mozak” have a higher degree of accuracy than conventional computer-based modeling tools. CreditStuart Isett for The New York Times

SEATTLE — Zoran Popović knows a thing or two about video games. A computer science professor at the University of Washington, Dr. Popović has worked on software algorithms that make computer-controlled characters move realistically in games like the science-fiction shooter “Destiny.”

But while those games are entertainment designed to grab players by their adrenal glands, Dr. Popović’s latest creation asks players to trace lines over fuzzy images with a computer mouse. It has a slow pace with dreamy music that sounds like the ambient soundtrack inside a New Age bookstore.

The point? To advance neuroscience.

Since November, thousands of people have played the game, “Mozak,” which uses common tricks of the medium — points, leveling up and leader boards that publicly rank the performance of players — to crowdsource the creation of three-dimensional models of neurons.

The Center for Game Science, a group at the University of Washington that Dr. Popović oversees, developed the game in collaboration with the Allen Institute for Brain Science, a nonprofit research organization founded by Paul Allen, the billionaire co-founder of Microsoft, that is seeking a better understanding of the brain. Dr. Popović had previously received wide attention in the scientific community for a puzzle game called “Foldit,” released nearly a decade ago, that harnesses the skills of players to solve riddles about the structure of proteins.

The Allen Institute’s goal of cataloging the structure of neurons, the cells that transmit information throughout the nervous system, could one day help researchers understand the roots of neurodegenerative diseases like Alzheimer’s and Parkinson’s and their treatment. Neurons come in devilishly complex shapes and staggering quantities — about 100 million and 87 billion in mouse and human brains, both of which players can work on in Mozak.

That is far more than professional neuron analysts at places like the Allen Institute can ever hope to handle. Enlisting novices through a game like “Mozak” helps with the task. But the real goal is to use high-quality neuron reconstructions done by humans — the more the better — to train computers to do the job more accurately than they can now.

“If we create a corpus of thousands of these neurons, the chances are the computational methods will become better,” Dr. Popović said. “You can see this as symbiosis — computers learn from what people are doing and they do better.”

“Mozak” has helped the Allen Institute increase the number of neuron reconstructions from 2.33 a week that a team of professional analysts were doing on their own, to 8.3 reconstructions a week, said Staci Sorensen, senior manager of morphology at the Allen Institute. That reflects both the contributions of players and the productivity benefits of an internal version of “Mozak” that the institute’s professionals now use.

About 200 people a day play “Mozak” now, and with more players will come more reconstructions.

“I’m hoping ultimately for an order of magnitude, a factor of 10, acceleration,” said Christof Koch, president and chief scientific officer of the Allen Institute. “How big is the community willing to do this? Is it 20 oddballs or thousands?”

“Mozak” is the latest in a growing array of citizen science initiatives with the dual aims of using the wisdom of crowds to tackle complex problems and engaging the public in science. There are public efforts to count bird populations to help scientists understand the effects of climate change. An effort called Galaxy Zoo aids the work of astronomers by getting the masses to classify the shapes of galaxies from telescope imagery.

In 2015, the Obama administration sought to build awareness of citizen science projects through a forum at the White House, creating a portal to catalog them. “Foldit,” Dr. Popović’s earlier effort, used game mechanics to become one of the most successful citizen science projects, attracting nearly a million players over its lifetime. Since then, similar games have found followings, like “EyeWire,” which uses players to map retinal neurons to help unlock the mysteries of vision.

The spark for “Mozak” came from Jane Roskams, a professor of neuroscience at the University of British Columbia and former executive director for strategy and alliances at the Allen Institute, when she attended a White House workshop on brain science initiatives a couple of years ago. After meeting with Dr. Popović back in Seattle, the two applied for and received a National Science Foundation grant that they used to develop the game.

“There are some clear opportunities for really engaging a much broader public audience for tackling some of these big data challenges,” Dr. Roskams said. “Most of the time experts think they need to turn to experts.”

Playing “Mozak” doesn’t offer the slick graphics and sugar rush of matching gems in “Candy Crush.” The game — the name of which means “brain” in Serbo-Croatian, Dr. Popović’s mother tongue — presents players with images of mouse and human neurons captured on powerful microscopes by the Allen Institute in its laboratories.

The neurons in the images, their dendrites and axons emanating from their somas, look like spiders with dozens of legs stretched to the breaking point in all directions. The images are grainy, with dandruff-like flakes floating around that are not part of the neurons. Computers just are not very good yet at constructing 3-D models out of all that noise.

But humans, if they are focused and patient, can be pretty adept at it. “Mozak” players ring up points as they trace the structure of neurons, then advance to a new neuron once they have finished reconstructing one. When multiple people trace the same 3-D models, there is a good chance they are accurate.

Bob Bondi, a retired software developer in Bend, Ore., has been playing “Mozak,” initially logging as much as 10 hours a day but has now tapered back to about three. Mr. Bondi likes the idea of contributing to science by playing the game (players who put in a serious effort are credited for their work).

A chat room allows players to commiserate with each other. Researchers chime in with advice at times. Mr. Bondi said “Mozak” also relaxed him.

“If I have a late night and I’m just not interested in listening to television, I do it to get my eyes tired to go to sleep,” he said. “It’s meditative in a way.”