Will Smith’s Genie: why the internet thinks he’s Sinbad from Shazaam! 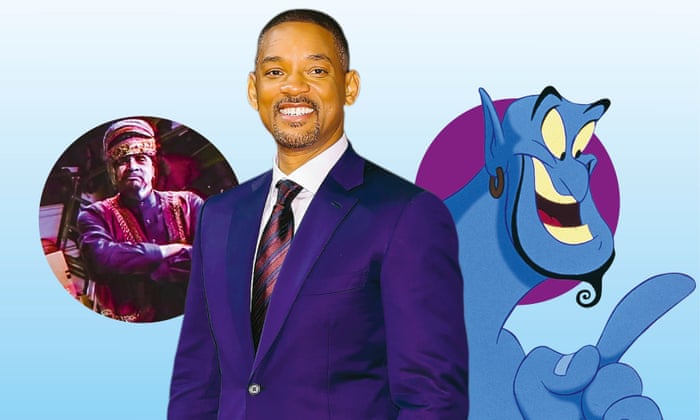 The first images of Will Smith as the genie in Disney’s new Aladdinbrought a rush of deja vu to many observers. Shaven-headed save for a long topknot, long goatee, chunky gold braces, sparkly waistcoat from the Orientalist fancy dress shop – didn’t Smith look just like the actor Sinbad in Shazaam!?

You remember Shazaam!, don’t you? That 90s kids’ comedy where the comedian Sinbad played a genie in modern-day America, summoned by some suburban kids? People have fondly recalled scenes from Shazaam! online. You can even find the video box cover, with Sinbad in the same genie get-up as Will Smith. But look up Shazaam! on IMDb or eBay and it doesn’t exist. In truth, the movie never existed. But people swear blind they remember it all the same. What does exist is Kazaam – a 90s kids’ comedy starring Shaquille O’Neal as a genie. But the Shazaam!/Sinbad myth somehow gained traction.

Contributing factors include the time in 1994 when Sinbad introduced Sinbad and the Eye of the Tiger on cable TV, dressed as a genie. Or at least the internet says he did – who knows? As a result of the Shazaam! chatter, someone Photoshopped the fake video box cover. Then, in 2017, excerpts emerged online from a “rediscovered” VHS copy of Shazaam! – with the actual Sinbad playing a genie! Unfortunately, the clip was an April Fools’ spoof, courtesy of US website CollegeHumor.

This collective misremembering is known as the “Mandela Effect” – based on the fact that many people (supposedly) believe that Nelson Mandela died in prison in the 1980s. You could also call it the “internet makes us all dumber effect”. Having outsourced our pop-culture memory bank to the web, we can no longer separate myth from fact, especially when it comes to movies. Bogart never says “Play it again, Sam” in Casablanca. The Amityville Horror is not based on a true story. Forrest Gump never says the words “life is like a box of chocolates”.

Disney films are no stranger to this territory, either. Rumours of a hidden message in the original Aladdin saying “good teenagers take off your clothes” turned out to be untrue, but The Lion King really did feature the words “S-E-X” spelled out in dust (well, the animators claimed it said “S-F-X”); there really was a photo of a topless woman in the background of The Rescuers; and we really did see that Jessica Rabbit was wearing no underwear in Who Framed Roger Rabbit. But good luck finding a copy of any of these movies to prove it: the offending frames have all been removed from reissues. Maybe they never happened. Maybe that is actually Shaquille O’Neal, not Will Smith, in the new Aladdin. Maybe The Matrix is real. The genie is out of the bottle.